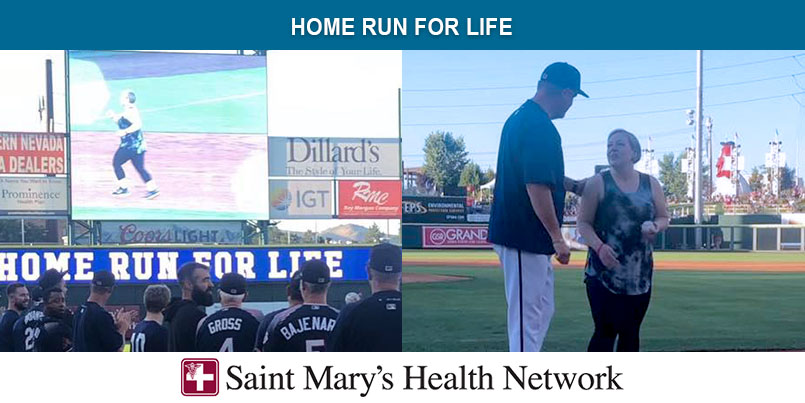 Since 2014, the Aces and Saint Mary’s have been partnered to showcase the “Home Run for Life” program. Once a month, a brave individual in the Northern Nevada community is honored by taking a ceremonial trip around the bases with each team lining the baselines. The ceremony symbolizes the end of a battle against adversity. Individuals honored had overcome a significant medical event in their life with the help of Saint Mary’s personnel.

In 2016, Carol felt a lump in her left breast. After getting an appointment with her doctor and having a mammogram, she was told that it was “just a cyst and there was nothing to worry about.” At the time, the lump was only the size of a quarter.

In June 2017, that quarter size lump grew to the size of an “Aces” baseball. Carol then had a biopsy and was diagnosed with invasive lobular carcinoma. By this time, surgery was not an option. Her medical oncologist sent her to Saint Mary’s Center for Cancer to undergo 8 treatments of Chemotherapy, to shrink the tumor before they could remove it. The chemotherapy did its job to shrink her tumor but, was causing severe liver damage, so she could not finish all 8 treatments.

During the chemotherapy treatments, she also developed a blot clot in her lungs and was diagnosed with Factor 5, a blood clotting disorder. She continues to have a IVC filter to catch the blood clots before they enter her lungs.

After 2 lumpectomies and 36 treatments of radiation, at Saint Mary’s Carol is now cancer free.

Davison will round the bases commemorating her “Home Run for Life” in the middle of the second inning Friday night. The Reno Aces and Iowa players and staff will be lined up along each baseline to greet Davison as she makes her way toward home plate while her story of adversity and triumph is publicly announced to the stadium crowd.