Aces to Host “Home Run For Life” Ceremony May 11 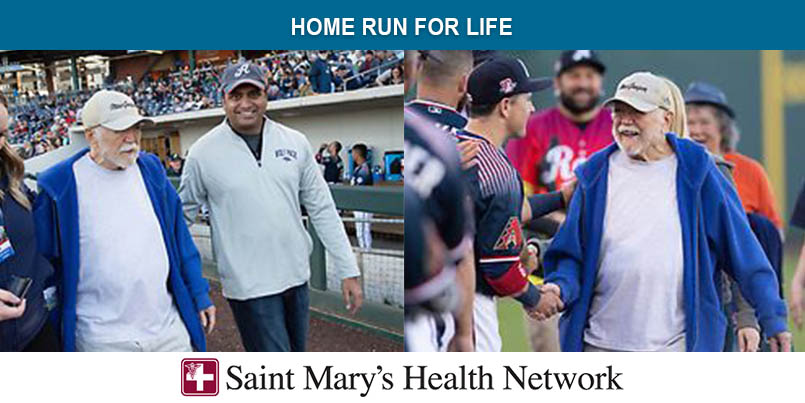 The Reno Aces will host Saint Mary’s “Home Run for Life” ceremony, featuring Bill Galine, a stroke survivor, on Friday, May 11 when the Aces take on the Albuquerque Isotopes at 6:35 p.m. at Greater Nevada Field.

Since 2014, the Aces and Saint Mary’s have been partnered to showcase the “Home Run for Life” program. Once a month, a brave individual in the Northern Nevada community is honored by taking a ceremonial trip around the bases with each team lining the baselines. The ceremony symbolizes the end of a battle against adversity. Individuals honored had overcome a significant medical event in their life with the help of Saint Mary’s personnel.

Bill suffered a stroke in April 2017. He was hospitalized at Saint Mary’s for 5 days then was transferred to a rehab facility for another 13 weeks, where he received rehab daily, one hour each of PT, OT, and speech. He was discharged home to receive outpatient OT and PT for 3 full months. Bill went from bedridden to using a cane or wheelchair during this time.

Since his discharge, Bill continues his exercise therapy six days a week at Saint Mary’s Fitness Center, with a personal trainer, warm water therapy pool, and working out with his spouse. He also has a home program if he is unable to get to the gym and continues to do brain games as well. He can now walk 450 feet unassisted and has now mastered the ability to get up off the floor without assistance.

Bill has made an amazing recovery with hard work. He attends every medical follow- up appointment. He follows the advice of his neurologist, Dr. Josh Kreiss, and Cardiologist, Dr. Joseph Stevenson.

Bill had a healthy lifestyle before his stroke and was a regular exerciser which helped his recovery. He has been fortunate to have excellent therapists all along this journey. He has a tremendous support team including his wife, family, friends, neighbors, and the staff at the gym.

In Bill’s words, “To get better you have to work at it every day. Set yourself goals and work your plan. Work your body and your brain. Do as much for yourself as you can. Don’t give up. Your body has the ability to regenerate. Let your brain know you want to get well and it will do everything it can to help.”

Galine will round the bases commemorating his “Home Run for Life” in the middle of the second inning Friday night. The Reno Aces and Albuquerque players and staff will be lined up along each baseline to greet Galine as he makes his way toward home plate while his story of adversity and triumph is publicly announced to the stadium crowd.