St. Mary’s named one of best 250 hospitals in US 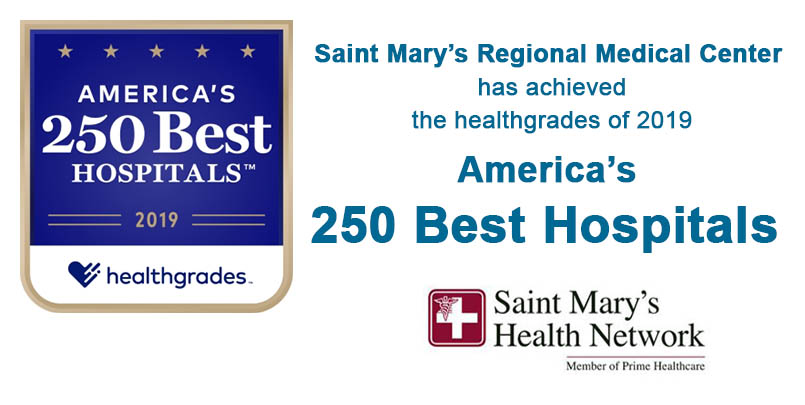 According to the report, the distinction places Saint Mary’s in the top 5 percent of more than 4,500 hospitals assessed nationwide for its clinical performance as measured by Healthgrades, an online resource for comprehensive information about physicians and hospitals. Saint Mary’s is the only hospital in the State of Nevada to receive this distinction, which puts it in the category of such facilities as the Mayo Clinic.

“Saint Mary’s is proud to be recognized as one of America’s 250 Best Hospitals by Healthgrades,” said Helen Lidholm, CEO of Saint Mary’s Health Network. “This distinction showcases our commitment to excellence and demonstrates why we’re currently the highest quality rated acute-care hospital in Nevada.”

The report says from 2015 through 2017, patients treated in hospitals receiving the Healthgrades award had, on average, a 27.1 percent lower risk of dying than if they were treated in hospitals that did not receive the award, as measured across 19 rated conditions and procedures for which mortality is the outcome.

The report also says during that same period, if all hospitals performed similarly to those achieving the award, 168,165 lives could have been saved. For example, patients treated for Respiratory Failure in hospitals achieving the Healthgrades America’s 250 Best Hospitals Award have, on average, a 25.4 percent lower risk of dying than if they were treated in hospitals that did not receive the award.

“The Healthgrades America’s 250 Best Hospital Award is a tool that consumers can use to identify the best hospitals for their care needs,” said Brad Bowman, Chief Medical Officer at Healthgrades. “We commend recipient hospitals for showing their dedication to patients by delivering exceptional clinical outcomes.”

Recipients of the Healthgrades award are recognized for overall clinical excellence across a broad spectrum of care. During the 2019 study period (2015 through 2017), these hospitals showed superior performance in clinical outcomes for patients in the Medicare population across at least 21 of 32 most common inpatient conditions and procedures — as measured by objective performance data (risk-adjusted mortality and in-hospital complications).