The seeds of Prime Healthcare’s success were first sown in the High Desert region of Southern California where Dr. Prem Reddy began practicing medicine in the 1980s. It was there Dr. Reddy built Prime Healthcare’s flagship facility, Desert Valley Hospital, to serve the community. Desert Valley Hospital has been recognized as a Top 100 Hospital in the nation six times.

Desert Valley Hospital was sold to another corporation for a few years, and immediately began faltering. In 2001, Dr. Reddy formed Prime Healthcare Services to re-purchase the hospital, rescuing it from bankruptcy and setting the standard for quality healthcare that continues throughout the hospital network to this day. Prime Healthcare’s motto is “Saving Hospitals, Saving Jobs, Saving Lives” which the company continues to do as it grows.

From the lessons learned during the transformation of Desert Valley Hospital, Prime Healthcare’s model was established and now leads to the rescue and transformation of financially struggling community hospitals across the country. Prime Healthcare is nationally recognized for award-winning quality care and has been named a Top 10 and Top 15 Health System by Fortune/IBM Watson Health. Its hospitals have also been named among the nation’s best as ”100 Top hospitals” 58 times by Fortune/IBM Watson Health and have received more Patient Safety Excellence Awards from Healthgrades than any other health system for seven consecutive years (2016-2022).

Three years after the formation of Prime Healthcare, the company purchased the second hospital in the family, Chino Valley Medical Center, when Dr. Reddy was asked to save the hospital from bankruptcy. Growth continued throughout the early 2000s, and in recent years has increased pace as the shifting healthcare landscape endangered more and more small community hospitals, threatening to close them without financial support. To date, Prime has invested more than $1.7 billion in capital improvements for its hospitals since 2005.

Prime Healthcare has expanded to 45 hospitals in 14 states across the country. In recognition of our impressive growth and success, Prime Healthcare has been named “The Fastest Growing Hospital System” in the country by Modern Healthcare. Every hospital acquired in financial distress has been transformed and are now vital community assets. Our experienced turnaround team has a record of success in finding operational efficiencies and minimizing bureaucracy to create an efficient healthcare delivery model. Our decentralized structure allows local leadership to make the right choices for their community, while benefiting from corporate guidance and support. 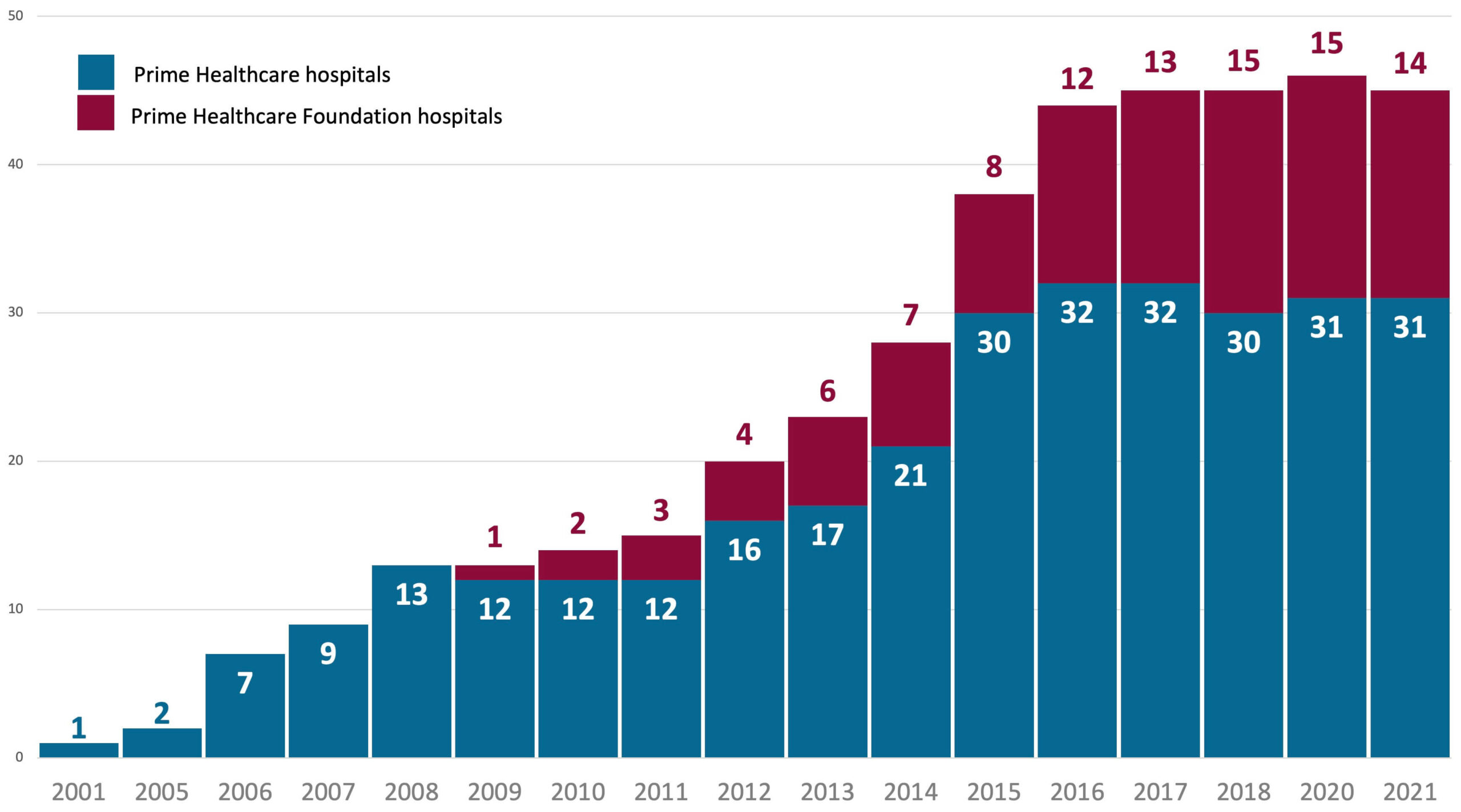